Главная
Home
About us
Summit 2020
About community 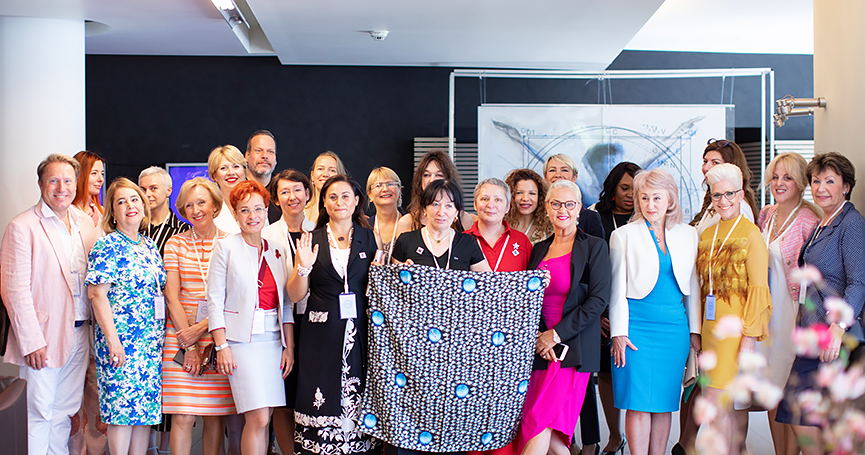 Peace 50 community brings together women from different countries having common values including humanism and aspiration to sustainable and harmonious development. P50 participants take the responsibility for preserving peace among nations and cultures.

The community’s participants include 50 women leaders from different countries. Each of them carries out unique projects in her own field of activity. Such a number of participants makes it possible to create conditions for real dialogue and mutual enrichment in terms of ideas.

“When women leaders unite, their interaction gives a significant result. And fifty wise, kind, and talented women are not just a team, but a powerful structured system able to address global problems", believes Marina Volynkina.

Absence of member fees and being not attached to state structures are the two key principles of the Peace 50 community.

The intertwined rings meaning synergy and powerful unity became the symbol of P50.

Peace 50: How it started out

When active, creative, concerned, and like-minded women meet one another, they become able to generate a number of new ideas and initiatives. The start to the great friendship and effective interaction between Barbara Dietrich, Editor-in-Chief of the Diplomatic World Magazine, and Marina Volynkina, Head of the Global Women Media news agency, was given at the Second Eurasian Women’s Forum in Saint Petersburg. When discussing its agenda, Ms. Volynkina and Ms. Dietrich understood that they both had similar life values and view of the global development issues. They decided to focus their joint efforts on the creation of a community of women like-minders. Their interaction has become a working model for Peace 50: uniting potentials of women leaders to achieve better results.

© 1996-2021 The Institute for the Humanities
and Information Technologies. All rights reserved
Global Women Media news agency

#Event of the month
DOCA 2022: What Is Your Name?
Preview exhibition of the Days of Contemporary Art international festival

#Readers' choice
Encyclopedia Book: The New Cherkashin
Artists’ project, which everyone can support